Because neither candidate won a seat with a majority vote, Moore and Iannotti face runners-up in November.

The runoffs are on Election Day, Nov. 3.

“It’s humbling,” Iannotti said. “And I’d like to think it was a reflection of how I ran my race — no empty promises and campaign slogans.”

Moore ran a campaign on “which people and the 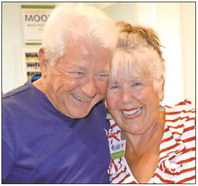 Jacqueline Moore celebrates a victory with husband Hugh in North Port’s District 2 race on Tuesday. She faces Cheryl Cook in a November runoff.

natural environment thrive.” She was grateful for capturing nearly 40% of the vote in a tight three-way race.

As North Port veers toward 80,000 residents, Sarasota County’s largest city, it has gained in diversity in age and culture, she said.

It has also added West Villages and Wellen Park, with its residents having a say in the Tuesday night vote.

A vibrant North Port “has always been our message,” Moore said.

While voter turnout in North Port on Tuesday was moderate, write-in voting was doubled from 2016. Email: craig.garrett@yoursun.com

Click here to see this page in the eEdition: